Richard John "Dick" Wickman, 88, of Bowling Green, KY, formerly of Gardner, passed away on January 17, 2016 in the Medical Center of Bowling Green, KY.
Born in Gardner on June 1, 1927, he was the son of the late Thursten and Helen (Cornberg) Wickman.
Dick was United States WWII Navy Veteran, Seaman First Class, and received the World War II Victory Medal, American Theatre Medal and Asiatic-Pacific Theatre Medal.
He worked for many years at his family's business, Children's Furniture in Gardner and later and operated Gardner Paint. He moved to Cape Cod where he was manager of Corcoran's Plumbing in Orleans, MA. He retired initially to Florida, and later moved to Bowling Green.
Dick's beloved wife of 66 years, Rita Y. "Grammy" (Mercure) Wickman, 87, died shortly after him on June 29, 2016.
Rita was born in Gardner on May 28, 1929, the daughter of the late Arthur and Rose Anna (Fredette) Mercure.
She graduated from Gardner High School with the Class of 1947, and was a member of Faith Lutheran Church (formerly Emmanuel Lutheran Church) of Gardner.
Rita was employed in the Financial Aid Office of Cape Cod Community College for many years, retiring in 1997. She loved baking, and treasured spending summers on Cape Cod. Rita most enjoyed spending time with her family.
Dick and Rita leave three sons, Bryan of Gardner, Craig of Bowling Green, KY and John of Kittery, Maine; six grandchildren; and eleven great-grandchildren.
A Memorial Service for Dick and Rita will be held Saturday, August 13th at 11:00 a.m. in Faith Lutheran Church, 627 Green Street, Gardner. Burial will be in Wildwood Cemetery, Gardner.
A time of visitation will be held Saturday, August 13th from 10:30 a.m. to 11:00 a.m. in the church.
Memorial contributions may be made to the Faith Lutheran Scholarship Fund, 627 Green Street, Gardner, MA 01440. Please reference in memory of Dick and Rita Wickman.
Boucher Funeral Home, Inc., 110 Nichols Street, Gardner is handling the arrangements.

To plant memorial trees or send flowers to the family in memory of Rita Wickman, please visit our flower store.

I had the great pleasure of meeting this wonderful witty easy going woman in December of 2015. I enjoyed my time with her and she left a lasting impression on me, rest in peace sweet Rita, you will be missed by all who had the opportunity to meet you. Condolences to her children, grandchildren, and great grandchildren.

A candle was lit in memory of Rita Wickman 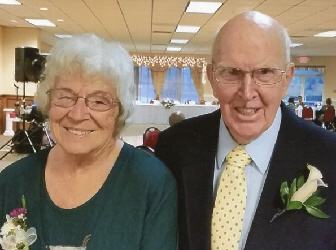