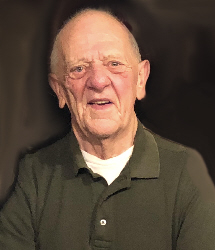 Patrick R. “Pat” Daigle, 82, of Winchendon, died at his home on Wednesday, October, 3, 2018 surrounded by his family after a long and courageous battle with cancer.

Born in Gardner on March 17, 1936, he was the son of the late Emile and Lillian (Gallant) Daigle.

Pat was a graduate of Gardner High School with the Class of 1955. He went on to receive his Associates Degree in Accounting from Bentley University in 1957. He also attended Clark University. He was an accountant and employed by The Country Hen of Hubbardston for 8 years. He was previously employed by Fontaine Bros., Heywood Wakefield Company, and was a Bail Commissioner for the State of Massachusetts. He was a National Guard Veteran, where he served his country for four years.

He was a member of St. Vincent De Paul Church of Baldwinville where he served on the finance committee and the Annual Bazaar Committee. He was also a member of AARP, and the Mill Glenn Campers Association, where he was a director and the treasurer for many years.

Pat enjoyed cardplaying, golf, traveling, gardening, watching Jeopardy and Wheel of Fortune, and spending time at his camp at Mill Glenn Pond, but his biggest enjoyment was spending time with his family.

Pat leaves his wife of 58 years, Patricia A (Kosakowski) Daigle; one son Daniel E. Daigle and his wife Donna of Boxford, MA; one daughter Debra M. Miller and her husband Thomas of Otter River; one brother Emile Edgar Daigle and his wife Pauline of Hubbardston; four grandchildren Lillyanne T. Daigle, Timothy S. Daigle, Nathan T. Miller and his wife Megan, and Kelsie A. Miller; several nieces, nephews, and cousins. He was predeceased by twin son and daughter, Michael and Patricia Daigle who died at birth; two brothers John Cleo Daigle, and Norbert Alvin Daigle; and one sister Marie Stella Dion.

In lieu of flowers, memorial contributions may be made to St. Vincent De Paul Church, 18 Pleasant Street, Baldwinville, MA, 01436.

To order memorial trees or send flowers to the family in memory of Patrick R. Daigle, please visit our flower store.