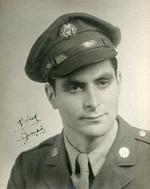 Nabeeh A. Joseph, 92, of Gardner, died peacefully Tuesday, January 2, 2018 in Wachusett Manor Nursing Home of Gardner, following a brief illness.
Born in Gardner on June 13, 1925, he was the son of the late Charles and Marie (Korem) Joseph.
Nabeeh graduated from Gardner High School with the Class of 1942. He earned his Degree in Journalism in 1948 from Suffolk University.
He was a Unites States WWII Air Force Veteran and received the American Theater Ribbon and World War II Victory Medal.
Nabeeh was owner/operator of Joseph's Variety of Gardner for several years, retiring in 1992.
He was a former member of Sacred Heart of Jesus Church of Gardner.
Nabeeh enjoyed coin collecting and reading.
He leaves one sister, Elaine J. Noone and her husband Arthur of The Villages, FL; two nephews, Sean Noone and Brian Noone; five great-nephews; and his longtime friend and caretaker, Fidele Boudreau of Gardner. Nabeeh was predeceased by two brothers, James Joseph who died in 2006, Edward Joseph who died in 1971; and one sister, Judy C. Joseph who died in December of 2017.
Funeral Services will be held Tuesday, January 9th at 12:00 p.m. in Boucher Funeral Home, Inc., 110 Nichols Street, Gardner. Burial will be in St. John's Cemetery, West Street, Gardner at a later date.
A calling hour will be held Tuesday, January 9th from 11:00 a.m. to 12:00 p.m. in the funeral home.
Memorial contributions may be made to Wachusett Manor Nursing Home, Activity Fund, 32 Hospital Hill Road, Gardner, MA 01440. Please reference in memory of Nabeeh Joseph.

To order memorial trees or send flowers to the family in memory of Nabeeh A Joseph, please visit our flower store.