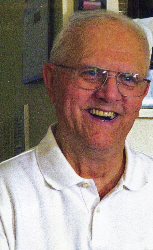 Born in Gardner on August 31, 1931, he was the son of the late Rudolph and Eva (Cormier) Couture.

Len graduated from Gardner High School with the Class of 1950. He was a United States Korean War Army Veteran and received the Occupation Medal Germany and the National Defense Service Medal.

Len was a member of the former Sacred Heart of Jesus Church of Gardner.

He loved sports and was an avid fan of the Boston Red Sox and New England Patriots. Len enjoyed playing pool and pitch; and he also enjoyed fishing. He was a member of the VFW Post 905 of Gardner and the Gardner Chapter of AARP.

He was predeceased by his wife of 57 years, Gladys P. (LeBlanc) Couture in 2010, and by his son Allan Couture in 2012; and two brothers, Robert Couture and Rudolph Couture, Jr.

To order memorial trees or send flowers to the family in memory of Leonard L Couture, please visit our flower store.