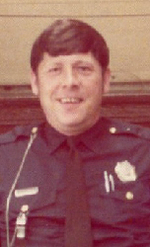 Leo A. LeTellier, 79, of Gardner, died peacefully Saturday, November 11, 2017 in Life Care Center of Leominster, following a long illness.
Born in Gardner on November 13, 1937, he was the son of the late Camille and Yolande (L'Huillier) LeTellier.
Leo graduated from the former Templeton High School with the Class of 1956 and later attended the Police Academy. He began his career as a reserve Police Officer with the City of Gardner Police Department in June of 1971, and was appointed a permanent Police Officer in July of 1972. Leo was promoted to Sergeant in 1979, and after 22 years of service he retired in December of 1993.
Leo was a member of St. Martin's Church of Otter River.
He was a car fanatic who loved purchasing cars and was previously a car salesman for Bill's Used Cars of Baldwinville. Leo had a passion for antiques and collectibles and enjoyed watching 'Antique Roadshow' and 'Pickers' on television. He was also a huge fan of the New England Patriots and the Boston Red Sox.
Leo leaves his wife Jeannie M. (Levin) LeTellier of Templeton; one son, Todd C. LeTellier and his wife Kimberly of Woodbine, MD; one sister, Jacqueline Y. Gallant of Gardner; three grandchildren, Matthew LeTellier, Lindsay LeTellier and Emma LeTellier; several nieces, nephews and cousins. He also leaves his close friend, George Ford.
Funeral Services will be held Saturday, November 18th at 10:00 a.m. in St. Martin's Church, 248 State Road, Otter River.
There are no calling hours.
Memorial contributions may be made to St. Jude Children's Research Hospital, 501 St. Jude Place, Memphis, TN 38105. Please reference in memory of Leo A. LeTellier.

To order memorial trees or send flowers to the family in memory of Leo A Letellier, please visit our flower store.