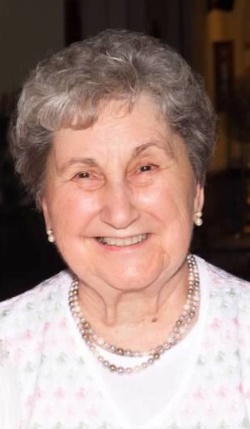 Born in Gardner on January 24, 1929, she was the daughter of the late Louis and Marie A. (Berthiaume) Gariepy.

Jeanne was raised and educated in Gardner. She attended Holy Rosary and graduated from Gardner High School with the Class of 1948.  Jeanne was a member of the former Sacred Heart of Jesus Church of Gardner, where she served as a Eucharistic Minister for many years. She was a former member of the Sacred Heart School Mother’s Guild; and she was active in many of the church’s activities, including the Thanksgiving dinners for the elderly, baking for the annual festival and fashion show fundraisers.

Jeanne and her husband Francis owned and operated The Wironen Studio, Inc. of Gardner for 42 years. In addition to raising a family of nine children, she played an active role in the studio operations. She performed a variety of office work, dealt with the needs of the customers, hand colored the portraits, and whatever else was needed, especially during holiday periods. When the studio was incorporated, she became its’ President.

Jeanne enjoyed many activities including oil and water color painting, reading, walking, sewing, and baking. Her greatest enjoyment was loving and hugging her grandchildren and great-grandchildren. She will be deeply missed by her family and all who knew and loved her.

She was predeceased by her husband of 59 years, Francis A. Wironen, who died in 2007.

Funeral Services will be held Friday, April 5th from the Boucher Funeral Home, Inc., 110 Nichols Street, Gardner with a Mass at 12:30 p.m. in Annunciation Parish/Our Lady of the Holy Rosary Church, 135 Nichols Street, Gardner. Burial will be in the Massachusetts Veterans Memorial Cemetery, 111 Glenallen Street, Winchendon.

To order memorial trees or send flowers to the family in memory of Jeanne R Wironen, please visit our flower store.