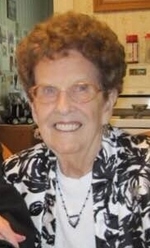 Harriet F. (Smith) Zukowski, 92, of East Templeton, passed away Saturday, May 28, 2016, surrounded by her family, following a short illness.
Born August 26, 1923, in East Templeton, she was the daughter of the late Herbert D. and Jessie (Smith) Smith. She attended school in East Templeton, and graduated from the former Templeton High School. During the war she worked at Heywood Wakefield and Hedstrom Union working on supplies for the troops. Following the war, she married the late Stanley Zukowski, started a family, and continued working until her retirement. She was employed by Independent Lock of Fitchburg for 20 years, and then worked as a hairdresser for the next 10 years, eventually owning her own salon on Parker Street in Gardner. After selling her salon, she was employed by Simplex Time Recorder of Gardner until her retirement in 1992.
Harriet enjoyed spending time with her family, painting, knitting and general craft work. She traveled extensively around the Caribbean, England and Europe. She was extremely generous with her family, enjoyed good health and was very independent.
She is survived by her daughter, Dianne Cosentino and husband Anthony of East Templeton with whom she has lived with for the past three years; one sister, Bonnie Sylvester and husband Gary of Hyannisport; two grandchildren, Patrick Cosentino and his partner Michelle Shea of West Boylston and Christopher Cosentino and his wife Sarah of Lancaster; three great-grandchildren, Isabella, Luciana and Vincent Cosentino of Lancaster; and many nieces and nephews. Harriet was predeceased by one brother, Kermit Smith; and three sisters, Madalyn Brown of Baldwinville, Doris Hill of Gardner and Bea Piragis of Athol. She was also predeceased by her partner and constant companion of 47 years, Roland Levesque, who died January 2014.
Funeral Services will be held Friday, June 3rd at 12:00 p.m. in the Boucher Funeral Home, Inc., 110 Nichols Street, Gardner. Burial will be in Crystal Lake Cemetery, Gardner.
A calling hour will be held Friday, June 3rd from 11:00 a.m. to 12:00 p.m. in the funeral home.
Memorial contributions may be made to MVOC (Montachusett Veterans Outreach Center), 268 Central Street, Gardner, MA 01440.

To order memorial trees or send flowers to the family in memory of Harriet F Zukowski, please visit our flower store.