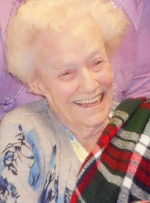 Gloria R. "Glow" (St. John) Brouillet, 86, of Leominster, died peacefully on Thursday, April 5, 2018 in Keystone Center of Leominster. She was surrounded by her family, listening to her favorite music by Elvis Presley, as God gently wrapped his arms around her and took her home.
Born in Gardner on February 29, 1932, she was the daughter of the late Arthur and Emma (Desolier) St. John.
Gloria graduated from Gardner High School. She was a member of Annunciation Parish/Our Lady of the Holy Rosary Church of Gardner.
She was employed by Heywood Hospital of Gardner as a Dietary Aide for over 25 years, and was previously employed by the former W.T. Grant Company of Gardner.
She enjoyed travelling, cooking her special Sunday dinners, and watching game shows on television. Gloria adored her cats and they were a significant aspect of her life. She also loved spending time with her grandchildren and great-grandchildren and treasured every moment of their visits.
She was predeceased by her husband of 30 years, Lewis Brouillet, who died in 1980; and by her son, Michael Brouillet, who died in 2004.
Gloria leaves one daughter, Deborah M. Prentiss and her husband Wayne of Templeton; one son, David S. Brouillet and his wife Muriel of Palm Bay, Florida; one sister-in-law, Pauline Smith of Colonial Heights, VA; five grandchildren, Eric Prentiss, Ryan Prentiss, Brad Prentiss, Jessica Brouillet and Amie Downing; thirteen great-grandchildren, Kaitlyn Prentiss, Rachael Prentiss, Hunter Prentiss, Angelica Prentiss, Izabell Prentiss, Zoey Prentiss, Dontavius Daughtry, Teanna Lavender, David Lavender, Keyuana Lavender, Shawn Ramsey, Cheyenne Downing and Aiden Downing; and one great-great grandchild, Zeek Lee Harvey.
Graveside Services will be private and held at the convenience of the family in Notre Dame Cemetery, West Street, Gardner.
There are no calling hours.
Memorial contributions may be made to Gardner Animal Control Facility (checks made payable to City of Gardner Shelter Fund, c/o Board of Health, 95 Pleasant Street, Room 29, Gardner, MA 01440 or to Annunciation Parish, 135 Nichols Street, Gardner, MA 01440.

To order memorial trees or send flowers to the family in memory of Gloria R."Glow" Brouillet (St. John), please visit our flower store.