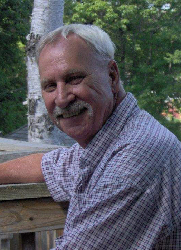 Jerry was born in Winchendon on September 23, 1942, the son of the late Leland and Edna (Pratt) Plummer. He graduated from Fitchburg High School. Jerry served in the United States Navy during the Vietnam War as part of the Helicopter Utility Squadron. He was a Supervisor in the Electronics Department of Simplex Time Recorder of Gardner for 20 years.

He was a member of the Fraternal Order of Eagles Aerie #747 of Gardner and the American Legion Post 129 of Gardner.

Jerry was Mary’s hero. He was an avid sportsman who loved all sports, and was a huge fan of the Boston Red Sox, New England Patriots and Boston Bruins. Jerry enjoyed fishing, candlepin bowling for Simplex, playing horseshoes for the Eagles, and playing softball for Simplex and the Eagles.

Family and friends are invited to a ‘Celebration of Jerry’s Life’ Friday, December 14th at 4:30 p.m. at the Acadien Social Club, 193 Parker Street, Gardner.

To order memorial trees or send flowers to the family in memory of Gerald W. Plummer, please visit our flower store.