Garrett J. "Gary" "Fish Tails" Burgess, 25, of Gardner, died Tuesday, April 4, 2017 in Rose Monahan Hospice Home of Worcester, surrounded by his family, following a brief illness.
Born in Gardner on August 1, 1991, he was the son of Sheridan and Marion (Atkinson) Burgess of Gardner.
Gary loved motorcycles, cars, and anything with a motor. He was an avid outdoorsman who loved hiking, camping, and fishing. He was a self-taught guitar player and loved playing for his daughter Aubrey. Gary enjoyed watching football, as well as movies on television with his family and friends.
Besides his parents, Garrett leaves his wife Kelly A. (Allen) Burgess of Gardner; daughter, Aubrey Burgess of Gardner; paternal grandmother, Linda Duncan of Steuben, ME; three brothers, Timothy L. Burgess and his wife Mallori of Worcester, Donnie L. Burgess and his wife Chelsey of Gardner, and Sheridan L. Burgess Jr. of Gardner; and several aunts, uncles, nieces, nephews and cousins.
Funeral services will be held Wednesday, April 12th at 12:00 p.m. in the Boucher Funeral Home, Inc., 110 Nichols Street, Gardner. Pastor David Bodanza of Mission Street Congregational Church of Gardner will officiate. Burial will be in Notre Dame Cemetery, Gardner.
A calling hour will be held Wednesday, April 12th from 11:00 a.m. to 12:00 p.m. in the funeral home.
Memorial contributions may be made to a charity of donor's choice.

To plant memorial trees or send flowers to the family in memory of Garrett Burgess, please visit our flower store.

So very sorry for your loss. May he rest in peace. Donna Offner (Williams ) Jessica Williams Jeremy Williams

Garrett, was such a sweet kid. I'll never forget the time he dyed his hair blue and ended up looking like a blueberry lol. He Was such a funny and caring person. He will be sadly missed.I haven't seen him in year's and until I saw his obituary I didn't even know that he became ill or that he or Donnie had settled down and got married and begun families of their own. My condolences to his entire family and friends. Rest in peace kiddo. Julie s celona!!

A candle was lit in memory of Garrett Burgess 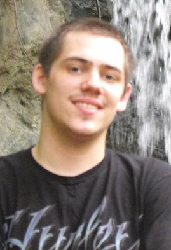