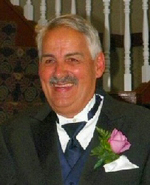 Ernest R. "Ernie" Duteau, 69, of Gardner and Daytona Beach, FL, died peacefully Saturday, January 6, 2018 in his home in Gardner, following a long and courageous battle with cancer. He was born in Gardner on January 20, 1948, the son of the late Romeo and Florence (Goguen) Duteau. Ernie graduated from Gardner High School with the Class of 1965, and he was a member of Annunciation Parish/Our Lady of the Holy Rosary Church of Gardner.
After Ernie graduated from High School, his first full time job was at Nichols and Stone Furniture Company of Gardner. He also worked at Mead Container Corporation of Gardner for several years, as well as the Gardner Post Office. He also worked part time at Hawkeye Hamburgers with many of his high school friends. He left the Gardner Post Office in 1976 to pursue a new career. Some questioned this decision, however, he believed that he could open a music store and be a successful business owner. With his longtime friend, Wayne Gallant, he opened the Music Forum, which became the heart of downtown Gardner for the next 31 years. The Music Forum began selling music and proceeded to be the first video store in the area selling BETA and VHS video recording machines and selling and renting movies. The Music Forum became a chain with 8 stores in the surrounding area. As co-owner of the Music Forum, he was an original member of Gardner Square Two, Inc.
Once Ernie retired from the music/video business, he became the owner/operator of several businesses, the most recent being 'Magic Moments' of Gardner and Leominster. He could be seen at the mall at Whitney Field during the Christmas season, selling Christmas ornaments and collectible items. He also owned a 'Curves for Women' fitness center in Daytona, FL for several years.
Ernie was an avid sports fan of the New England Patriots and New York Yankees. He enjoyed golfing and was extremely proud to have had a 'hole in one' during his career. Ernie loved attending his grandchildren's sporting events and made everything involving his grandchildren a top priority. He enjoyed going on cruises and organizing group cruises for his friends up until last year. He loved attending concerts and in previous days enjoyed country line dancing. He formed a team for the Greater Gardner Relay for Life which he led for several years. His team was one of the largest fundraising teams during those years. He carried on his parent's tradition of organizing "Gardner Day' in Port Orange, FL, which was a day of gathering and sharing a potluck dinner for all residents of Gardner, MA who either retired or spent time in Florida.
Ernie also took on the role of being the Co-Chairman of the Social Committee at the Ashley Condominium on Daytona Beach Shores where he and his wife Kathy lived during parts of the year. He coordinated events and parties for everything imaginable. From Movies on Mondays, to Sundaes on Saturdays, there was always something to do for everyone at the Ashley. Ernie always kept himself extremely busy, but what he enjoyed most was spending time with his family and friends whom he dearly loved and making memories that would last a lifetime.
He leaves his wife of 27 years, Kathleen (Bourgeois) Duteau of Gardner and Daytona Beach, FL; daughters, Lisa M. Comeau and her husband Randy of Gardner, Becky A. McCaffrey and her husband Michael of Westminster, and Christina J. Adams and her husband James of Gardner; son, Corey T. Bushey and his wife Sara of Fitchburg; two brothers, Robert R. Duteau and his wife Carin of Townsend and Norman R. Duteau and his wife Lisa of Sedona, AZ; grandchildren, Christian Comeau, Alyson Comeau, Noah Johnson, Abby Johnson, Sean McCaffrey, Cheyenne Toomey-Marvin, Jacob Bushey, Vanessa Adams and Emily Adams; aunts, Jeannette Artymovitch of Port Orange, FL and Marilyn Duteau of Holly Hill, FL; nieces, Amy Gamble, Brienna Duteau, Samantha Bourgeois; and Goddaughter, Jessica Walker.
Ernie passed away at 69 years old, but lived his life to the absolute fullest. He was always busy doing or planning something, inviting those around him to always join and feel welcome. He made every event special and fun in only a way that he knew how. He will be missed greatly by his family and many friends; however, he left us all with many, many special memories to hold in our hearts.
Funeral Services will be held Thursday, January 18th at 11:00 a.m. in the Boucher Funeral Home, Inc., 110 Nichols Street, Gardner.
Calling hours will be held Wednesday, January 17th from 5:00 p.m. to 7:00 p.m. in the funeral home.
Memorial contributions may be made to the American Cancer Society, Gardner Relay for Life, 43 Nagog Park, Suite 110, Acton, MA 01720 or to GVNA Healthcare, Inc., Hospice, 34 Pearly Lane, Gardner, MA 01440. Please reference in memory of Ernest R. Duteau.

To order memorial trees or send flowers to the family in memory of Ernest R."Ernie" Duteau, please visit our flower store.