Donald M. “Don” Sawtell, 83, of Westminster, died peacefully in his home on Friday, December 25, 2020, due to complications from bladder cancer, with his family by his side.

Born in Ware, Massachusetts, on August 18, 1937, he was the son of the late Joseph O. and Margaret W. (Carter) Sawtell. He graduated from Barre High School with the Class of 1957. He was a United States Army Veteran serving from 1957 to 1960.  When Don enlisted, he had two requests:  he wanted to drive a tank, and he wanted to see Germany.  He got his request and became a tank commander in Amburg, Bavaria.

After leaving the Army, Don worked for Starrett Precision Measuring Tools, living briefly in Los Angeles, California, before returning home to his beloved New England.  He began work as a lineman with Massachusetts Electric Company, which he loved as it gave him the opportunity to work outside.  Don worked with Massachusetts Electric for over thirty-five years until his retirement in 1998.

Don met his wife Sharon on one of the earliest computer dating services, Date-A-Mate.  Returning home from his first date with Sharon, he announced to his mother that he had just met the woman he was going to marry.  Don and Sharon celebrated their 50th wedding anniversary together in July 2020.  They purchased their “forever home” together in 1970 on a beautiful pond in Westminster, and welcomed their daughter in 1973.

Don was an avid outdoorsman, a lover of books and film, and history buff.  He learned to hunt and fish in the woods and streams in Barre, Massachusetts.  He loved the bow and arrow, and along with his trusty Weimaraner hunting dogs, would provide venison for the family.  Early in their marriage, Don and Sharon fished in the Canadian lakes.  But quickly they discovered one of their favorite pastimes, deep sea fishing out of Chatham, Cape Cod.  One of their proudest days was when they reeled in over 1,000 pounds of cod in a single day.  Don was meticulous about the quality of his catch, and sold his cod commercially to local restaurants. His deep-fried codfish balls are the stuff of legend.

Don was a champion marksman, and was a member of the Westminster Rod and Gun Club and the National Rifle Association.  He shot Revolutionary War muskets and Civil War carbines and pistols.  He won first place at the National Muzzle Loading Rifle Association Championships in 1990 with a smoothbore musket.  This is one of the most challenging guns to shoot, since they lack a rear site which makes them difficult (if not impossible) to aim, and there are no rifling grooves inside the barrel, so the trajectory is highly inaccurate.

Don was a member of the North-South Skirmish Association (NSSA) and the 10th Massachusetts Battery Company.  These groups shoot Civil War guns in team and individual competitions, both locally and nationally, while wearing authentic Civil War dress.  He won many gold, silver, and bronze medals at the North-South Skirmish Association’s National Championships, shooting his carbine and pistol and also participating on the cannon team.  Don served as Commander of the Battery and volunteered whenever there was work to be done when they hosted events or travelled for competitions.

Don loved antique automobiles, and one of his most prized possessions was a 1914 Model T Ford.  Don and Sharon drove over 35,000 miles together in their Model T.  A Model T can get to speeds of 40 miles per hour, but Don preferred puttering along winding dirt roads at exactly 24 miles per hour.  An antique car that continues to be used requires endless upkeep, and Don spent many happy hours polishing the brass lights, tinkering with the intricate engine, and of course, changing many tires.

Don was a member of the Yankee IngenuiTs Model T Club, the New England Brass and Gas Club, and the Horseless Carriage Club Association.  Don and Sharon went on countless tours in their Model T with these clubs, travelling throughout the United States.  One of their favorite trips was in 2008, when travelled with friends to Richmond, Indiana to the Model T Ford Club of America’s 100th Anniversary Model T Ford Party, to celebrate the invention of Don’s favorite car.

Don was an amateur photographer and videographer.  Some of his favorite subjects were New England winter landscapes and historic churches.  He had an amazing eye for detail, and was an expert at creating video montages with perfectly timed music.  He produced wedding videos for friends and family, and enjoyed making sure that he captured every moment of the special day, often sneaking behind the scenes to get candid, personal shots.  He loved new technology, and was an early adopter of all new video and camera equipment.  In the 1980s, his video equipment was so cutting edge that he was often assumed to be a member of the press!  His video of Model T skimobiles plays on a consecutive loop in the National Model T Ford Museum in Richmond, Indiana. In his later years, he enjoyed experimenting with 3D video, and took amazing shots of the family trip to Italy in 2013.

Don loved to travel throughout the United States and Europe.  Don and Sharon travelled to almost every State in the U.S. in their camper, and would often bring the Model T along so that they could find some fun backroads to explore.  The peaceful valleys of Vermont were one of their favorite haunts. Don and Sharon’s first trip to Europe together was in 1980 when they spent three weeks travelling from Switzerland to England.  Don and Sharon visited Poland with Sharon’s wonderful Polish family in 2001.  Don and Sharon travelled to Shanghai, China, to visit their daughter and son-in-law who were living there in 2008.  And they enjoyed a wonderful river cruise from Budapest, Hungary to Amsterdam, Netherlands in 2016.

Museums of all types were Don’s favorite, from his beloved Smithsonian Institution in Washington D.C., to quirky roadside Americana museums.  He knew how to spend his time in a museum, reading all of the plaques and absorbing every detail.  No museum was too small or too out-of-the way for Don, whether it was a clock museum or a museum about popcorn.

Don’s favorite meal of the day was breakfast, although for him breakfast usually occurred at 11:00 am.  He would grab his dog and hop in the Model T to visit one of the many local breakfast joints in the area.  He knew the names of all the staff, always asked about their families, and loved being greeted by name when he walked in the door.  Everyone knew that he would always take a bit of the choicest morsel at the end of the meal, wrap it in a tissue, and give it to his dog waiting patiently in the T for his master to return.  During the coronavirus pandemic, Don and Sharon were especially grateful to the local restaurants who provided safe, outdoor dining areas for the elderly.  They would spend hours together talking, eating, and enjoying their time together.

Services will be private and held at the convenience of the family.

Memorial Contributions may be made to the Salvation Army, Massachusetts Division, 25 Shawmut Road, Canton, MA 02021 or on their website at (www.salvationarmy.org); to Dana-Farber Cancer Institute, 450 Brookline Avenue SW120, Boston, MA 02215 or on their website at (www.dana-farber.org); or to Care Central VNA and Hospice, Inc., in gratitude for the compassionate care they provided while Don was home on hospice, at 34 Pearly Lane, Gardner, MA 01440.  Please reference in memory of Donald M. Sawtell.

To plant memorial trees or send flowers to the family in memory of Donald Sawtell, please visit our flower store.

What an incredible life lived. Thanks for sharing the storiesit brought back many great memories of years with the family.

I will never forget Don driving my husband and me in the Model-T Ford from our wedding ceremony to reception. Don was of course dressed perfectly to match the era of the car and beeped and waved to everyone who stopped to look as we drove down the road in Staunton, VA.

Don, named after my dear grandfather, was a kind, respected and a fun loving man who often chose the road less traveled and that made all the difference. My memories of Don include two things that really stand out. His love of family and of his dogs. I have fond memories as a child of spending the holidays with Don, Sharon and family. They were special times. I also remember how special his dog always was to him and how fortunate an animal could be to have Don as its master! My heart is glad to have Known and had Don as a family member. May he rest in eternal peace and may the family he left behind know the world is better because he lived.

So sorry to hear of Dons passing. Please have our sincere condolences.

A candle was lit in memory of Donald Sawtell

I met Don at the Westminster Rod and Gun club over 15 years ago. I remember him shooting his musket at painted tin cans at 50 yards. I would watch in amazement. He rarely missed. In the years to follow we became friends. At the range we sometimes spent more time talking than shooting. Don was a gentleman always discussing topics with a positive attitude.
Don was my friend and I will cherish the memories we shared.
My condolences to his wife Sharon and his family. May his memory be eternal.

My second cousin that as a young man worked on his uncles farm in barre,carter& Stevens farm.Don lived life to its fullest.He inspired me in so many ways.The knowledge he had was contagious! Will be missed by all that knew him.

I remember the enjoyment that Don brought to all of his co-workers at Mass Electric with the videos of fishing on Lake Misstassini and Chebaugamau in Quebec as well as Cape Cod and the Quabbin. He always carried a thermos filled with coffee to work and could make it last all day. It became known as the "Eternal Thermos". One day at work when he was driving the truck and stopped in a long line traffic, he opened his thermos and knew he had time for some coffee because he had timed out the traffic light to the second, worked out in detail from previous trips. Always the gentleman in every way. Rest in peace, Don. 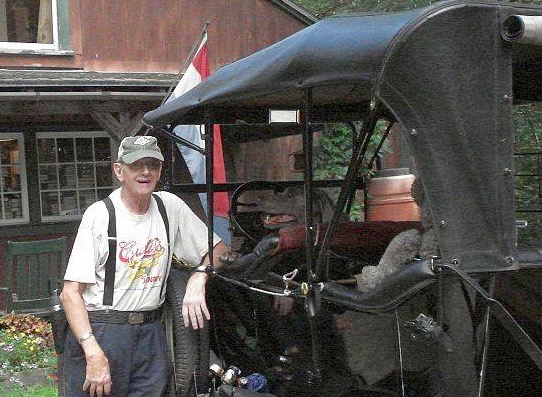